Background: There are numerous unavoidable hurdles encountered by scientists to achieve an ideal drug delivery. Among them, the high-water solubility of a therapeutic molecule has been observed as a chief pausing factor that diminishes the biological stay and shortens the half-life of a drug. The ramification of this occurs that patients have to take medications multiple times in a single day to maintain the drug-plasma concentration. These consequences lead to poor pharmacological responses and ultimately do not add any significant outcomes in the betterment of patient’s health. A similar phenomenon has been observed with the delivery of some potent Anti-Parkinson’s medications, for instance, Pramipexole. The current research is aimed at developing the biological residue of Pramipexole Hydrochloride (PRP) based on the counter ion technology that has provided a sojourn release of PRP by retarding the aqueous solubility, which is further characterized using the dissolution study.

Materials & Methods: Initially, the molar ratio of PRP and the selected counter ion, i.e., Disodium Pamoate (NaPAM), was quantified to produce the stable salt. Thereafter, the salt formation was preceded by the precipitation method and this primarily obtained salt is called microcrystals. In the next stage, the microcrystals were characterized by numerous analytical tools such as Differential Scanning Calorimetry (DSC), melting point, and Mass Spectrometry (MS). On the other hand, Ultraviolet Spectroscopy (UV) was used for the simultaneous determination of PRP and NaPAM in the formed salt. After this, the development of nanocrystals from microcrystals was carried out using high-shear homogenization (HSH) with the aid of α-Tocopherol Polyethylene Glycol 1000 Succinate (TPGS), employed as a stabilizer. The preceding step was performed by analyzing the particle size. Following this, an in vitro dissolution study was planned using a dialysis bag system (at 6.8 pH buffer) along with vehicle development and characterization being taken into consideration.

Results: An equimolar ratio (1:1) of PRP and counter ion stipulated the complete reaction occurred among them and then considering this ratio (based on the percent loading efficiency (%LE) and complexation efficiency) (%CE), salt preparation was done. Upon analysis of the developed salt (microcrystal), satisfactory outcomes have assured the complete and compatible salt formation. Besides it, simultaneous estimation certified that the presence of PRP and NaPAM in the formulation does not affect each other, qualitatively and quantitatively. Apart from that, the particle size of these nanocrystals was also found in the acceptable range. Furthermore, Pramipexole Pamoate Nanocrystals Salt (PPNS) was formulated, and in vitro dissolution study showed that PPNS was significantly able to extend the release (93.87 % release, i.e., sustainable) up to 48 hours as compared to the standard PRP. Additionally, the developed vehicle was found suitable and stable, both at room temperature and stress conditions.

Conclusion: To sum up, the data gathered here expressed promising results and rendered an insight that PPNS might be a good option (if clinically proven safe and efficacious) in the nearest future to enhance patient compliance by minimizing the daily demand of PRP for Parkinson's patients. According to our knowledge, we are the first ones reporting depot formulation employing nanoconcepts for the cure of Parkinson’s. However, in vivo animal model studies along with pharmacokinetic data, must be designed to establish the safety and efficiency of PPNS. 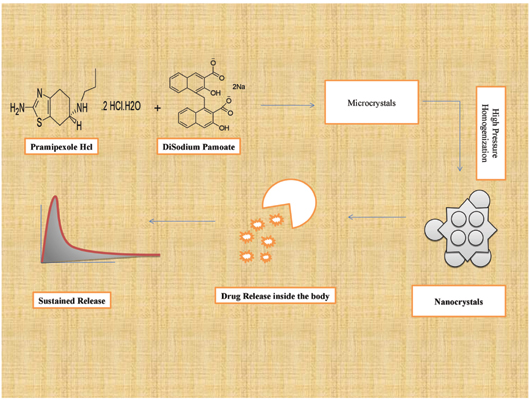